US sprinter, Marion Jones, gave up the gold medal for the 100 meters at the 2000 Sydney Olympics. Greece's Olympic committee confirmed a decision to give the medal to Greek sprinter, Katerina Thanou. 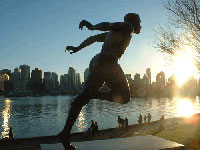 "We can't say anything until the official decision of the International Olympic Committee, as it is their issue," Hellenic Olympic Committee president Minos Kyriakou told The Associated Press on Thursday. "If the decision is positive, of course we will applaud it."

He said it is his personal opinion that "she deserves to get the gold."

Kyriakou spoke following a meeting at the HOC with the incoming culture minister, Michaelis Liapis, and new deputy minister for sport, Ioannis Ioannidis.

Thanou is in line to receive the gold medal as she finished second behind Jones in the 100.

After long denying she ever had used performance-enhancing drugs, Jones admitted Friday that she'd taken the designer steroid "the clear" from September 2000 to July 2001. On Monday, she returned her five Sydney Olympic medals.

Normally, medal standings are adjusted so the silver medalist moves up to gold if the winner is disqualified for doping or other reasons.

But any decision to bump Thanou up to gold would be controversial because the Greek runner was caught up in a major doping scandal of her own.

Thanou and fellow Greek runner Costas Kenteris failed to show for drug tests on the eve of the 2004 Athens Olympics, claiming they were injured in a motorcycle accident while on the way to the athletes' village. They subsequently pulled out of the Athens Games, and were suspended for two years.

Thanou and Kenteris are also due to face perjury trial on charges of staging the motorcycle crash to avoid the tests.

All of the other 100-meter finishers in Sydney, including 3rd and 4th place finishers Tanya Lawrence and Merlene Ottey, also would move up a spot.

The IOC would need evidence or an admission that Thanou was doping at the time of the Sydney Games to keep her from getting the gold. Some have suggested leaving the gold medal position vacant.

The IOC is studying the medals issue and is expected to make a ruling by its next executive board meeting in December.

Since Jones has surrendered all medals after Sept. 1, 2000, including a silver in the 100 meters at the 2001 world championships in Edmonton, Thanou - who finished third in that race - would be in line to move up to silver.