Guus Hiddink, Russia coach, explained the decision to play Wednesday's European Championship qualifier against England on artificial grass. The coach said it was necessary in order to allow all team fans to attend the match. 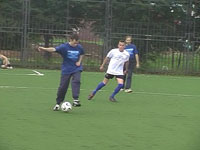 The Luzhniki Olympic stadium is the biggest sports stadium in Russia with a capacity close to 85,000. But it has a plastic field, forcing the England team to train Monday at a school which has a field made of the same material before it leaves for Russia.

"The choice of the stadium is so that we don't neglect our fans with more than 700,000 requests for tickets for this match," Hiddink said. "We want as many people as possible to see it. Honestly, as a coach, I would prefer that my team plays on a natural surface."

British media reported that the Russian soccer federation refused to switch the match to another stadium to gain an advantage.

"As for an advantage of playing on the artificial grass, it is insignificant," Hiddink said. "The English can also train on such surfaces."

England striker Michael Owen, who underwent a hernia operation two weeks ago, has reportedly been warned by former Lokomotiv Moscow player Garry O'Connor that he risks injury if he plays on the artificial surface.

"It used to hurt me for three or four days after I'd played on it," O'Connor was quoted as saying in The Sun. "I would really ache because it's just not a natural surface. It really messes with your body. So, if anyone is a doubt with a muscle injury, they could be in trouble."

Russia team doctor Andrei Grishanov said playing on one type of surface and then shifting to another does have an effect.

"But the muscles gradually adapt and the coordination improves," he said.

England is second in Group E with 20 points, three behind Croatia but two in front of Russia with three games remaining.