Serena Williams advanced to the quarterfinals of the Kremlin Cup

Serena Williams advanced to the quarterfinals of the Kremlin Cup. Tatiana Perebiynis of Ukraine saved three match points before Williams won with a powerful backhand. 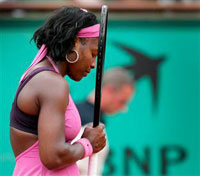 Serena Williams advanced to the quarterfinals of the Kremlin Cup

"I don't I think I've played up to my standards today but I was glad to get through," Williams said.

In the second round of the men's tournament, second-seeded Mikhail Youzhny of Russia was upset by Michael Berrer of Germany 7-5, 6-4, and Janko Tipsarevic of Serbia rallied to beat third-seeded Andy Murray of Britain 6-4, 7-5.

Williams and Perebiynis traded breaks three times in the first set before the fourth-seeded American broke again with a backhand down the line in the 12th game.

The seventh-ranked Williams was leading 2-0 in the second set but lost her next serve at love and Perebiynis leveled at 3-3 after trading serves one more time.

Williams, who said she wasn't used to playing in morning matches, had trouble with her volleys early but managed to score several key points at the net in the second. Her first serve also improved, and she finished with six aces.

"Usually I sleep at 11, but I liked it because if I have to play hopefully four days in a row it's good to play early," Williams said.

In Friday's quarterfinals, Williams will play eighth-seeded Nicole Vaidisova of the Czech Republic, who beat Elena Vesnina of Russia 6-3, 6-4.

"She is a great champion and she's always tough," Vaidisova said of Williams. "I know it's going to be a very tough match tomorrow. She's always trying to her best."

Williams, an eight-time Grand Slam champion, is playing in Moscow for the first time in a decade. In 1997, the 16-year-old Williams qualified and lost in the first round when she was ranked 448th.

After winning the first set, Tipsarevic struggled early in the second. He trailed 5-2, but then won five straight games to eliminate Murray.

"I do not feel like I played too badly today," Murray said. "I had so many chances in the second set ... and had some pretty rough calls - five or six around that time between 5-2 and the end of the match."