Serena Williams beat Tatiana Perebiynis 7-5, 6-4 to advance to the quarterfinals of the Kremlin Cup Thursday. 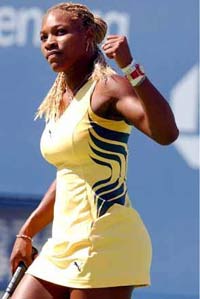 Williams and Perebiynis traded breaks three times in the first set before the fourth-seeded American broke the Ukrainian with a precise backhand down the line in the 12th game for a 1-0 lead.

Williams, ranked No. 7, was leading 2-0 in the second set but lost her next serve at love and Perebiynis leveled at 3-3 after trading serves one more time.

Serving in the 10th game, the 130th-ranked Perebiynis saved three match points before Williams clinched the victory with a powerful backhand shot.

The eight-time Grand Slam winner is back at Moscow for the first time in a decade to look for her 29th career title. At 16, Williams qualified and lost in the Kremlin Cup's first round in 1997 when she was ranked 448th.

In Friday's quarterfinals, Williams will play either Elena Vesnina or Nicole Vaidisova.