A Mexican politician accused of cheating in marathon said that he never intended to complete the race and simply went to the finish line to collect his belongings. 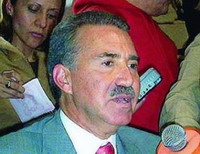 Roberto Madrazo, who finished a distant third in Mexico's 2006 presidential election, was lampooned around the world after photographs and video footage showed him running across the finish line pumping his arms and grinning in the Sept. 30 Berlin marathon.

Madrazo broke a week of silence Wednesday, issuing a statement in which he said the allegations of him cheating were nothing more than political attacks meant to discredit his sporting career and his as-yet-unlaunched foundation, Marathon: A Foundation for Competition.

"I never declared myself the winner in Berlin with the time distributed by the media nor did I receive any medal for the alleged first place," Madrazo said.

He did not explain, however, why he crossed the finish line running with the rest of the participants or why he didn't alert race officials that he hadn't run the whole course.

News of his escapades in Berlin have made Madrazo the butt of nationwide jokes in Mexico, where many said he took his party's old-style dirty tricks to the world of international sports.

Madrazo was the 2006 presidential candidate for the Institutional Revolutionary Party, or PRI, known for rigging elections before it lost the presidency in 2000, after 71 years in power.

Mexico's federal attorney general's office said it proved massive campaign financing violations by Madrazo in his successful 1994 campaign for governor of Tabasco. But officials in the PRI-dominated state shelved the allegations.

Madrazo said he was never trying to fool anyone with his Berlin race.

Madrazo said he stopped running after the 21st kilometer because of an injury and headed to the start/finish line to pick up his clothing and participatory medal.

The race's Web site says all runners receive participatory medals, and that certificates with time and placing are sent out automatically by mail.

Race director Mark Milde said Madrazo would be receiving a disqualification letter instead.