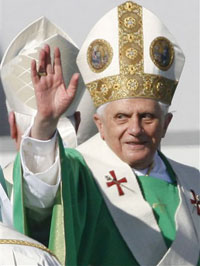 A third division soccer club of Italy was praised by Pope Benedict XVI for for ports signing on to a program by a Christian sorganization that seeks to promote ethics in soccer.

Wearing red jerseys, the players of the Ancona team were among the faithful gathered in St. Peter's Square for the pope's weekly audience.

"I encourage them to work so that the game of soccer may become ever more an instrument of education to the ethical and spiritual values of life," Benedict told the crowd.

The team's captain later presented Benedict with Ancona's pennant as well as a red-and-white soccer ball.

The agreement between Ancona and the Italian Sports Center, a Christian organization that promotes education through sport, provides for higher ethical standards in the administration of the club as well as in the behavior of players and fans.

Last year, Italian soccer was hit by a corruption scandal, and fan violence remains a problem, as it is elsewhere in Europe.

Under the "Project Soccer" deal, parents of young players will be helped in raising their children as they grow up in the world of professional soccer, while the main squad will take part in educational and solidarity programs.

Before the audience, the Vatican made clear that neither the Vatican nor the Italian Bishops Conference had any involvement with the project.

Ancona played in Italy's top division Serie A in 2003-2004 but the club went bankrupt after that season. A refounded team was entered into the Serie C2 tournament and now plays in Serie C1.