A heart condition, not record-setting heat, killed a man during an unusually hot and humid Chicago Marathon. 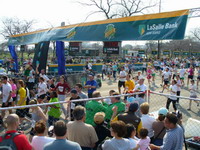 Chad Schieber, 35, collapsed well into Sunday's race, leading to speculation his death was related to the 31-degree (88 Fahrenheit) temperatures that forced organizers to announce they were halting the race. Several other people collapsed, and at least two remained in critical condition Monday.

The medical examiner's office said Schieber had mitral valve prolapse and did not die from the heat, according to the Cook County Medical Examiner's office.

The condition is a "common heart disorder" in which the valve between the "heart's left upper chamber and lower left chamber does not close properly," according to MayoClinic.com. It is in most cases harmless, the sometimes requires treatment, the Web site says.

Schieber, police officer from the state of Michigan, was pronounced dead shortly before 1 p.m. at a Veteran's Affairs hospital, according to the medical examiner's office.

"It sounds like he lost his pulse very fast and died on the race course," George Chiampas, the race's medical director, said at a news conference. Chiampas said witnesses reported seeing Schieber collapse and become unresponsive.

At least 49 people were taken to hospitals, while another 250 were treated onsite, many for heat-related ailments. About 10,000 of the 45,000 registered runners never even showed for the race, while another 10,934 started but didn't finish, officials said.