Argentina beat Scottland to reach the Rugby World Cup semifinals for the first time, winning 19-13 Sunday in a game that simply had no chance of matching the drama of the other three quarterfinals. 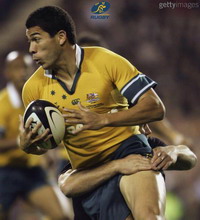 It had a thrilling finish, however, with Scotland camped on the Pumas line seeking a matchwinning try which eventually never came.

Gonzalo Longo Elia's first half try opened up a 13-3 lead for the South Americans who at least became the first team from outside the Tri- or Six Nations to reach the last four. Their prize is a game against South Africa, which beat Fiji 37-20 earlier Sunday.

"I think we were very tired and Scotland played really well, so we just stuck with it," Argentina scrumhalf Agustin Pichot said. "We are very pleased to be in the semifinals.

"We didn't underestimate them. They played with pride, they played with passion. I have a lot of respect for the Scottish. We knew the Scots were very strong and would be difficult to beat."

"They had a stranglehold on the game and are very difficult to play against," he said. "They were a bit more mature in the decision-making around the ball. We didn't play well enough ... it took us just a little bit too long to get into the game."

As for Scotland, it had reached the quarterfinal for all six World Cups but didn't have the guile Sunday to go any further.

"I thought we played well in the second half, we probably started a bit too late," said flyhalf Dan Parks. "We had a chance at the end but didn't take it.

"It's a heart-breaking way to go out because we could have got over the line there bit didn't."

The French fans, clearly still angry at Argentina for beating their team in the opening match of the championship, loudly booed the Pumas for constantly kicking and gave loud cheer whenever the Scots, who reached this stage by beating Italy with six Chris Paterson penalties, ran the ball.

Contepomi missed a routine penalty from right on the 22-meter line and Parks, who launched three huge positional kicks in the first 20 minutes, showed him how it should be done by putting the Scots ahead with a penalty from one meter inside the Argentina half.

Contepomi then got his aim right by equalizing with a 45-meter penalty and, after a feeble drop goal attempt by Hernandez, the inside center kicked the Pumas 6-3 ahead in the 29th minute when the Scots were penalized for not releasing.

The Pumas then went further ahead with an opportunist try when Parks' kick from inside own 22 was charged down by Elia. The ball flew back over the Scottish tryline and the No. 8 chased for it with two Scots and, helped by a lucky bounce, was able to touch down.

Contepomi converted and Argentina led 13-3, which was cut by three points just before halftime when Paterson landed a 28-meter penalty for handling in a ruck.

Contepomi's third penalty restored the Pumas' 10-point advantage early in the second half when the Scots were guilty of collapsing a maul and Hernandez increased it to 19-6 with a deft drop goal after the Pumas won possession from a Scottish lineout.

Scotland coach Frank Hadden responded by making four changes in one go, three in the pack and sending Chris Cusiter on for Mike Blair at scrumhalf.

The switches made an impact with a Scottish try which came at the end of sudden burst of open play by both teams. After the Pumas had turned over a Scottish move, the Scots won the ball back and swept back downfield. Backrower Kelly Brown provided the overlap on the left and fed the ball inside for Cusiter to go over.

Paterson's angled conversion went over via the inside of the post and the Scots were back in the game only six points behind.

A converted try would still do it and when Parks launched a huge torpedo from a penalty to gain lineout ball only five meters from the Argentina line, the Scots forced a series of rucks only to be kept out. When Parks kicked high to the corner, Sean Lamont stretched but couldn't reach it and Scotland's hopes of the semifinal were over.