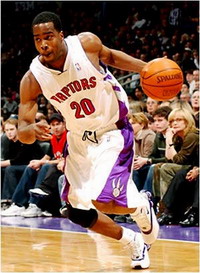 Andrea Bargnani added 13 points and seven rebounds to help the Raptors win in his hometown.

Toronto was coming off a loss to the Boston Celtics on Saturday in the NBA Europe Live tour.

Toronto coach Sam Mitchell made one change in his starting lineup from the Celtics game, inserting swingman Carlos Delfino for Jason Kapono. Bargnani started again at center, along with Bosh at forward and T.J. Ford and Anthony Parker at guard.

Toronto had 16 players suited up for the game, while Roma had only 11.

After Roma opened up an early lead, Toronto began to assert itself at the end of the first quarter with a series of shots by Spanish tandem Jorge Garbajosa and Jose Calderon, plus solid input from reserve forward Kris Humphries.

Former Celtics member Allan Ray sliced through the lane a couple of times for Roma, which was quicker than the Raptors on the fast break.

Roma is already two games into the Italian league season, with a 1-1 record.

With only two players more than 6-foot-7 tall, though, Roma struggled in the paint, where the 6-10 Bosh was able to operate relatively uncontested.

Iceland guard Jon Stefansson hit a 3 to put Roma in front 34-33 and Bargnani replied from beyond the arc a few minutes later as the lead swung back and forth in the second quarter.

Drejer was fouled by Joey Graham while shooting a 3-pointer, converting a four-point play that gave Roma a 45-44 lead at halftime.

Drejer and Ray continued their shooting streak to start the second half and Roma opened up a 65-58 lead toward the end of the third quarter.

Kapono hit four straight free throws to put Toronto back in front 67-66 at the end of the third.

Mitchell put his starters back in to start the fourth and Toronto went on a brief run before Ray tied the game at 71 with another 3.

Kapono and Parker both sunk 3's as Toronto went on a 10-0 run to take an 85-75 lead with less than six minutes remaining and put the game out of reach.

A hybrid of NBA and Euroleague rules were used for the game, with a mix of referees also.

In addition to Bargnani, the Raptors have six other players with experience in European leagues.

Parker played for Roma in 2002-03 and Rasho Nesterovic was with the Italian club in 1997-98. Garbajosa was Bargnani's teammate at Benetton Treviso, Delfino played in Italy with Reggio Calabria and Skipper Bologna, Calderon made his mark in the Spanish league and Maceo Baston played in Spain from 2001-03.

Roma's Croatian guard Roko Ukic was drafted in the second round by Toronto in 2005,

NBA commissioner David Stern attended the game at the Palalottomatica, which was not full. The attendance was 9,823, well off the 11,118 that attended the Raptors-Celtics game a night earlier.

The Raptors now travel to Spain to play Real Madrid on Wednesday. After returning to Canada, Toronto has one more game against European competition with Zalgiris Kaunas on Oct. 17 before facing NBA teams for the remainder of the preseason.