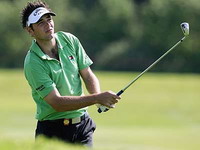 "To beat a field of this caliber, and at St. Andrews which has never been good to me, is amazing," Dougherty said.

The 18-year-old McIlroy turned professional after the Walker Cup last month and earned his full Tour card in only two events. He was 42nd in the British Masters last month.

"I knew at the start of the week I had to do something special to earn my card," said McIlroy, who rebounded from a double bogey seven at the 14th to birdie three of the last four holes.

McIlroy's birdie at the difficult Road Hole 17th came on a 5-iron approach from 195 yards that finished eight feet from the hole.

Ernie Els (71) tied for sixth with fellow South African Trevor Immelman. Els had a triple-bogey 7 at the 16th, where he putted from just off the back of the green into a bunker. He took four more to get down, and three-putted with a miss from 2 feet.

Dougherty's other European Tour victory came at the 2005 Singapore Open. On Saturday, Dougherty shot a 6-under 66, his best round at St. Andrews.

Dougherty three-putted the opening hole and drove into a fairway bunker at the second as his three-stroke overnight lead quickly dropped to one.

But his birdie run, including a 15-footer putt at the 6th, put him back in control.

"I was nervous at the beginning," Dougherty said. "My coach said to me to expect a bad start because of that. But I knew I had the game to get back.

"The story of the round was on the greens. I would have liked to be a little more focused on my putting," said Harrington, who is one of the 16 players in this week's World Match Play at Wentworth.