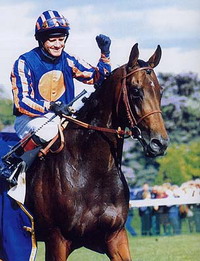 Jockey Kieren Fallon kept the 4-year-old colt well placed throughout the 2.4-kilometer (1.5-mile) race, after pacesetter Song of Hiawatha took the lead on the backstretch.

Dylan Thomas, the 7-1 second favorite, produced an impressive turn to overtake Soldier of Fortune on the outside in the final straight and get in front 200 meters from the wire.

Youmzain, a 4-year-old colt that went off at 81-1, came from behind on the stretch but could not close in, losing by a nose to Dylan Thomas.

Sagara, a 3-year-old colt, finished third, a length and a half behind. Authorized, the 2.1-1 favorite ridden by three-time winner Frankie Dettori, failed to live up to his superstar status and finished 10th after starting from the 12th post on the wide outside.

It took nearly 30 minutes for stewards to confirm the results, as they debated whether Dylan Thomas in the stretch had come across Zambezi Sun, a 7.1-1 shot, and Soldier of Fortune.

Trainer Andre Fabre failed in his attempt to win his eighth Arc as Getaway, ridden by Olivier Peslier, was fourth.