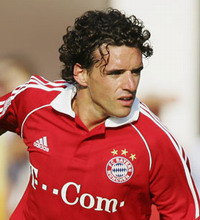 England will play without Owen Hargreaves at this month's European Championship qualifiers against Estonia and Russia.

Hargreaves, who has only played three times for United since joining from Bayern Munich in the offseason, was expected to play a part in Tuesday's Champions League group match against AS Roma but was missing after receiving an injection to cure tendonitis.

He isn't likely to play again until November.

That means England coach Steve McClaren, who could also be without captain John Terry because of a broken cheekbone, is likely to stick with the central midfield partnership of Steven Gerrard and Gareth Barry.

Gerrard and Barry started together in last month's 3-0 home wins over Israel and Russia.