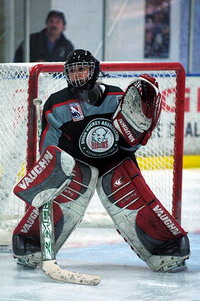 Robinson's team, Asiago, said he fell to the ice without being hit during the first period of a game with Renon and was rushed to a local hospital where he died. No cause of death was given.

Robinson, who played with nearly half a dozen teams in the North American minor leagues before transferring to Asiago in 2005, was in his second season with the Italian club. He held dual Canadian-Italian citizenship and was born in Kamloops, British Columbia.

The game was suspended.