Milton Bradley tore a ligament in his right knee when he was pulled away by his manager Sunday from a confrontation with an umpire and will miss the rest of the Major League Baseball season. 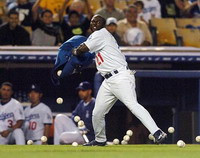 The diagnosis came from an MRI exam, according to a person with knowledge of the situation, who spoke Monday on condition of anonymity because a formal announcement had yet to be made.

Bradley, who helped spark the Padres during the season's second half, was ejected by umpire Mike Winters. He then hurt his knee during a bizarre scene when manager Bud Black spun him to the ground to keep him from going after the first base umpire in the eighth inning of Sunday's 7-3 loss to Colorado.

The Padres, trying to reach the playoffs for the third straight year, entered Monday night's game at San Francisco with a one-half game lead over Philadelphia in the wild-card race. San Diego was 2 1/2 games behind first-place Arizona in the National League's West Division with seven to play. San Diego had won seven straight against last-place teams San Francisco and Pittsburgh before their offense went flat and lost three straight to the hot-hitting Rockies.