Jorge Andrade, Portugal defender will be out for "a long period of time" after shattering a bone in his left knee, according to his club Juventus. 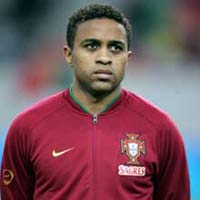 Andrade was carried off the field 54 minutes into Juventus' 2-2 draw with Serie A leader AS Roma Sunday.

Juventus said Monday that Andrade's patella bone is shattered, and that the player will need surgery.

"(The) situation appears less serious than previously thought but the player will still be unavailable for a long period of time," the club said.

Andrade joined Juventus from Deportivo La Coruna in the offseason.

Midfielder Mauro Camoranesi and defender Jean Alain Boumsong are both out with thigh injuries, while defender Jonathan Zebina has two games remaining in his four-match ban for slapping a stadium worker.

Juventus has seven points after four rounds of Italy's top division and hosts Reggina on Wednesday. Roma has 10 points.