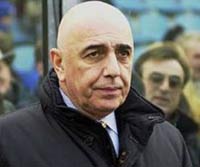 The indictment request, however, did not include Inter owner and president Massimo Moratti, who was also under investigation, news agency Ansa reported.

COVISOC, the regulator for Italian soccer, said in June that Serie A champion Inter would not have cleared the annual parameters required for all clubs for the 2005-06 season if it had reported its books accurately. It also cited irregularities for Milan in 2003 and '04.

European champion Milan issued a statement on its Web site Monday denying any wrongdoing and saying it expected to be cleared.

Inter also has denied the allegations. Moratti has labeled the probe "absurd," saying player valuations were volatile and "difficult to understand."