Floyd Landis can not clear himself in doping case 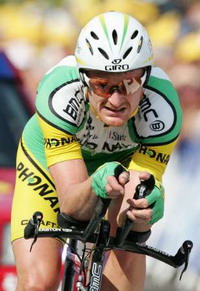 Floyd Landis can not clear himself in doping case

Pound said that despite Landis' contention that the test procedures were less than perfect, there was no escaping the fact that banned substances were found.

By a 2-1 decision Thursday, an arbitration panel upheld Landis' positive doping test from the 2006 Tour de France. The decision means Landis is no longer the race champion and faces a two-year ban from cycling, retroactive to Jan. 30.

In its 84-page decision, the majority found the initial screening test to measure Landis' testosterone levels - the testosterone-to-epitestosterone test - was not done according to World Anti-Doping Agency rules.

But the more precise and expensive carbon-isotope ratio analysis (IRMS), performed after a positive T-E test is recorded, was accurate, the arbitrators said, meaning "an anti-doping rule violation is established."

"I think if you read it carefully you'll see that maybe some of the early stages of this thing were not as precise and crisp as they could have been, what they found is synthetic testosterone," Pound said. "You can run but can't hide."

Landis' attorney, Maurice Suh, said Friday that Landis needed time to consider his options, which include an appeal to the Court of Arbitration for Sport and even possible litigation outside the anti-doping system.

"For the moment we just have to say that they speak for themselves and you can interpret them as well as we can," Pound said of the results. "Our policy is that if there is an appeal, we're probably going to get involved one way or another and therefore it's better if we don't say anything until the delay for appeal has expired or an appeal has been filed."

Pound made his comments at a press conference following weekend meetings of WADA's executive board.

Pound also commented on Canadian cyclist Genevieve Jeanson, who admitted in a recent television interview that she had in fact been doping throughout her career, charges that she had up until now denied.

Jeanson tested positive in 2005 and was given a lifetime ban by the U.S. Anti-Doping Agency, but she argued at the time that she never took the banned substance and the ruling was reduced to a two-year suspension.

"Frankly, everyone already knew the truth," Pound said. "I think it was important for her to finally admit it. The sad thing is that she began doing that as a 16-year-old."

Pound acknowledged that Jeanson's revelation ultimately helps WADA's cause, if for nothing less than adding more proof that the doping culture in the sport exists.

"It's important for us in the ongoing promotion of anti-doping to have athletes who were suspected of doing this come forward and saying, 'You know, I did it. I'm not going to go on denying, pretending it didn't happen,"' Pound said. "It's important to know that there are athletes out there who have done this, more than you suspect perhaps, and that for years and years and years they have simply stonewalled and denied and lied. You can't dress it up more than that."

In what he termed "very interesting" meetings over the course of the weekend, Pound said that the executive committee approved the 2008 list of banned substances.

Selective androgen receptor modulators (SARMs) were added to the list, along with agents modifying myostatin functions, including myostatin inhibitors. SARMs are a family of nonsteroidal molecules that have the same effect as anabolic steroids.

The prohibition of intravenous infusions was amended to allow those that treat an acute medical condition.

"A high percentage of the stuff that is used for doping actually started off having therapeutic medical use, it's just been abused," Pound said.

The committee approved a budget that will increase by four percent and include US$5.6 million worth of scientific research projects.

The meetings were the final gathering of WADA executives before the third World Conference on Doping in Sports in Madrid from Nov. 15-17.