Steve Flesch shot a 1-over 73 on Sunday and beat Michael Allen by two shots in the inaugural Turning Stone Resort Championship. 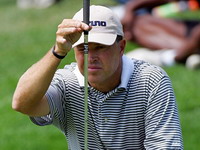 For Flesch, who began the day with a four-shot lead over Carl Pettersson and Charles Warren, it was his fourth career victory on the PGA Tour and marked the third straight time he's won after holding the 54-hole lead. The third-round leader has won five of the last eight events on the PGA Tour, dating to Flesch's victory at the Reno-Tahoe Open in August.

It was a banner day, nonetheless, for the 48-year-old Allen (68), who last year made his 13th trip to the Q-school finals and earned his PGA Tour card for a record ninth time. Although Allen failed to get his first victory, he earned $648,000 to boost his earnings to a career-high $960,297, inside the top 100 on the money list.

It wasn't difficult to figure out how Flesch won. Over the first three rounds, he reached 51 of 54 greens in regulation, hit 32 of 42 fairways, made 14 putts of more than 10 feet, and was 11 under on the more difficult back nine, including a course-record 30 on Friday that included four birdies and an eagle. That put him at 19 under and tied the PGA Tour's lowest 54-hole score in relation to par this year.

The largest come-from-behind win on tour this year was by Padraig Harrington, who came from six shots back on the final day to win the British Open. There were only three players within six shots of Flesch at the start of play Sunday - Pettersson and Warren were the closest at four shots back - but Flesch made it interesting for a while with three bad shots on the first two holes.

Flesch began the round by driving into a fairway bunker on the opening hole, a 404-yard par-4. He hit cleanly out but 40 yards short of the pin, and despite a perfect lie mishit his third shot. It skidded left into a greenside bunker, he hit out to 40 feet and two-putted for bogey.

There was more trouble at No. 2, another par-4. After a perfect drive down the middle of the fairway, Flesch's second shot sailed past the green into the rough 43 feet from the hole. And when he slid his chip 15 past the pin, he was unable to salvage par and dropped back to 17 under.

Flesch finally regained his stroke at the 203-yard par-3 third hole, hitting his drive to 4 feet and making birdie while Pettersson settled for his third straight par.

Pettersson found trouble at No. 4. Both he and Flesch drove into a fairway bunker along the right side, their balls stopping in the sand 6 inches from one another. Flesch hit out first and lofted his second shot to 9 feet and made birdie. Pettersson hooked his second shot left, it rolled down a hill to the right of the green, some 62 feet from the pin, and he two-putted for bogey from inside 15 feet.

Any chance Pettersson might still have had disappeared along with his ball at the par-5 fifth hole, statistically the easiest hole on the course. After a nice drive at the 552-yard dogleg left, Pettersson hooked a fairway wood low and left toward a giant water hazard. The ball landed in 3-foot-high weeds on a near-vertical slope, forcing Pettersson to take a penalty, and he made bogey again.

Warren, who finished a career-best second to Flesch at Reno, fell back quickly with two bogeys on the first three holes.