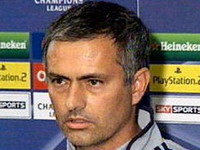 Not only did refereeing decisions go against Grant in Sunday's 2-0 loss at Manchester United, but throughout the match at Old Trafford the Blues fans expressed their support for Jose Mourinho, who left the team on Wednesday.

If the fans had heard Grant's post-match denouncement of the referee, however, they wouldn't have detected much of a change from his predecessor.

The 52-year-old former Israel coach even lodged an appeal against the red card shown to John Obi Mikel in the 32nd minute by referee Mike Dean for a two-footed challenge on Patrice Evra.

Louis Saha scored with a penalty kick in the 90th despite appearing to dive when challenged by Tal Ben Haim.

"He (Dean) made three mistakes only - the red card, the goal after additional time and the penalty," Grant said. "Apart from this he was good."

Grant also believed United striker Wayne Rooney, who had already been booked, should have been dismissed when he appeared to stamp on Ashley Cole's foot in the 70th.

"(Alex) Ferguson can be happy with the referee today. He can be more than happy not only that Rooney was not sent off for a second yellow card, but for the other decisions," Grant said.

Despite the disappointing debut after a week of turmoil at Stamford Bridge, Grant was upbeat.

"I am very proud of what the players did this week - how they behaved, how they trained, their spirit," Grant said. "It's not easy for them and also not for me."

Chelsea dropped to sixth place, having not earned three points since a 1-0 victory in August over Portsmouth.

But Grant believes his players are capable of clawing back the five points separating his team from leader Arsenal, which has played one game fewer.

"Of course we can still win the Premier League," Grant said. "I remember last season the difference between Manchester United and Chelsea was 12 points, and then when it was nine everyone said we could become champions.

"Five points is not a big problem for us now. We need to win games and then think about it but we can still have a good season."

Before Sunday's match, the Israeli had never coached a league team outside of his native country, and visiting fans showed their support for his predecessor in a banners unfurled before the match.

"Jose Mourinho simply the best," read one stretching across the away corner at Old Trafford.

It took just 10 minutes for the fans to start singing Mourinho's name, followed by choruses of "Steve Clarke's blue and white army" - a tribute to Mourinho's former No. 2 and former Chelsea player who has remained in the role.

Grant was unfazed by the conspicuous lack of support.

"I like the attachment of the supporters for Jose who was there before me," Grant said. "He did good things here, we remember that. ... I've only been here three days so I don't think are any songs for me - maybe in one or two years."

Grant faces another potentially tricky match at Championship side Hull in the League Cup on Wednesday. But his biggest challenge is securing the necessary UEFA coaching qualifications needed to take charge of a top division English club.

"Avram doesn't have a Pro License because in Israel they don't have the Pro License," Chelsea spokesman Simon Greenberg said. "There's a 12-week period of grace with the Premier League in which there are no issues about him coaching the team. In that 12-week period we will be making the necessary applications in order for him to get a Pro License.

"There are certain precedents in place for experienced coaches like Avram, or the fact that you can begin to undergo the courses. The process is under way on both."

"The Association's stance on mandatory qualifications is well known and well documented," the LMA said in a statement. "We have always supported the principles of education and preparation for a career in football management."

If the Premier League rules that Grant, who insisted Sunday there would be no problem, is unqualified, he would have to step down in January.

If the results continue in the vain of Sunday's defeat, billionaire owner Roman Abramovich, who was at Old Trafford, may start to look elsewhere.