Alex Ferguson manager of Manchester United put aside three years of fierce hostilities with Jose Mourinho on Friday to admit he will miss the former Chelsea manager. 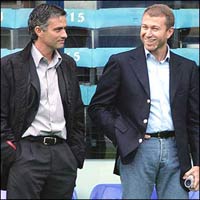 "It's a disappointment for the game, I think he was terrific for football and terrific for Chelsea," Ferguson said. "I enjoyed the competition - he was something fresh and new to the game ... I wish him well."

The duo were never afraid to exchange insults as their sides battled for Premier League supremacy. After the Portuguese coach took charge at Stamford bridge in 2004 he won the league title in his first two seasons, but the trophy was back at Old Trafford in May.

Mourinho's departure from Chelsea late Wednesday "by mutual consent" means that Ferguson will come face-to-face with new manager Avram Grant when the rivals clash at Old Trafford on Sunday.

"I will miss the personal challenge but what it does to them doesn't matter to me. We have to be focused on ourselves and Sunday's game," Ferguson said. "(Mourinho) had fantastic, unparalleled success, without question, and it's a test for whoever replaces him. At the moment (it's) Avram Grant - it's a big test for him."

In a catalog of explosive skirmishes, Mourinho regularly accused referees of favoring the Red Devils, while Ferguson has admonished his rival for being devoid of principles.

"I just don't know what I'm going to do with my wine now," Ferguson joked, referring to his penchant for sharing a bottle with Mourinho after games.