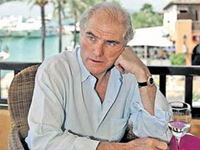 On Tuesday Real Madrid will play with Werder Bremen, turning its attention to the Champions League.

Madrid's three straight wins in the league have increased expectations on coach Bernd Schuster to deliver in Europe, where the Spanish champions have stumbled since Zinedine Zidane led the team to its ninth European Cup in 2003.

Madrid president Ramon Calderon is confident that the EUR119 million (US$165 million) he has spent rebuilding a team that won the league title last year will deliver.

"It's not a change of coach, but a change of sporting project. We've made a real revolution," Calderon said. "We've now formed one of Europe's best squads, and not a mere amalgamation of names."

Madrid hasn't been hurt by the exits of coach Fabio Capello and midfielder David Beckham.

"We no longer have a 'galactico' mind-set. No more can some players do certain things while others cannot," Calderon said. "That broke the spirit of the group and caused fights. We haven't just spent, we have invested."

One of those investments, attacking midfielder Wesley Sneijder, leads the league with four goals.

And Ruud van Nistelrooy is expected to return after sitting out Saturday's 3-1 win over Almeria, but its still unclear if winger Arjen Robben will make his debut Tuesday.

"I don't know what will happen with Robben on Tuesday," Schuster said. "If he can be ready for Tuesday, great. We all want him to play. But we need to make sure that when he makes his debut he is physically ready."

Defensive back Gabriel Heinze is also questionable and Royston Drenthe is expected to drop back and cover the Argentine's place.

Werder Bremen goes into the Madrid match following an inconsistent start to the season that has seen it take only seven points from five Bundesliga matches. A long list of injured players includes Germany midfielders Torsten Frings and Tim Borowski.

"We know that we have to overcome a difficult phase at the moment," Bremen general manager Klaus Allofs said. "If we perform that way against Real Madrid, we'll get another hammering.

"We should not talk about fear ahead of the Real game - that would be the wrong approach," Allofs added. "But we must ask ourselves the question of how it can be that the team loses the plot in this way after falling behind."

Madrid will not take its foe lightly.

"German teams are always tough nuts to crack because they defend very well," Madrid midfielder Julio Baptista said. "We know they will look to draw the game and we have to destroy them."

Greek champion Olympiakos and Lazio are also in Group C.