Luiz Felipe Scolari may end his career thanks to another bad result and an ill-considered left jab. 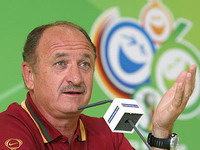 Tempers flared after the Portuguese were held to a 1-1 draw by Serbia on Wednesday in a European Championship qualifier, the team's second straight draw in Lisbon which put the World Cup semifinalist's qualification in doubt.

When Portugal winger Ricardo Quaresma and Serbia's Ivica Dragutinovic squared up to each other after the final whistle, Scolari intervened.

TV pictures showed the Serb slapping away the Brazilian's arm. In reply, Scolari aimed a left-handed punch at Dragutinovic.

"I don't know what the pictures show but I didn't touch him, I didn't even bump up against him," Scolari said. "He was going to hit Quaresma and I jumped in to stop him."

Dragutinovic, who was shown a red card after the whistle, apparently for abuse, was enraged.

"It's unacceptable for a coach to do something like that," he said.

UEFA said Thursday it has opened a disciplinary investigation against Scolari and Dragutinovic. The incident is to be examined at a meeting of the control and disciplinary body Sept. 19.

Scolari, who won the 2002 World Cup with Brazil before joining Portugal, said he wasn't worried.

"There's no evidence that can convict me. I'm absolutely certain about what happened," he said.

Scolari apologized Thursday but insisted he was provoked into "thoughtless actions."

"I'm not infallible. Everyone makes mistakes," Scolari said in a statement. "I lost my head, but it was because I was protecting my player."

"I don't understand it when a world champion coach comes onto the field to hit an adversary," Clemente said.

The Portuguese soccer federation said it would discuss the incident on Friday.

"The result and Portugal's performance disappointed and saddened me, and the behavior at the end of the match must be censured," Portugese secretary of state for sport Laurentino Dias said.

Whatever the outcome, the incident cast a pall over Scolari's stewardship of Portugal's national team, which he led to the final of Euro 2004 and the semifinals of last year's World Cup, its best showing in more than 40 years.

The Portuguese recently have floundered despite marquee names like Cristiano Ronaldo and Deco.

Just like in the 2-2 draw against Poland last weekend, Portugal faded in the second half against Serbia and threw away their lead. Scolari was unable to stop the rot, and his substitutions were broadly criticized.

At the end, some of the crowd at the packed Jose Alvalade Stadium jeered and waved white handkerchiefs, indicating they wanted Scolari out.

"Scolari's Dark Night," A Bola announced in its front-page headline. Inside, it said the game was "the saddest moment of Scolari's career with the Portuguese national team."

Record chimed in: "Scolari loses his charm." It said his behavior was "disgraceful," adding: "If Scolari doesn't resign ... someone will have to do something about him."

It wasn't the first time Portugal has earned condemnation for hot-headed behavior.

After two of his players were sent off in an ugly 1-0 win over the Netherlands in the second round of the 2006 World Cup that featured World Cup-record-tying four red cards and 16 yellows, Scolari labeled his players heroes.

The record books show it may not be Scolari's fault, though.

In the Euro 2000 semifinals, when France beat Portugal 2-1, Portuguese players protested a late French penalty so strongly that Abel Xavier was suspended from international competition for six months, Nuno Gomes got a seven-month ban and Paulo Bento a five-month penalty.

FIFA suspended forward Joao Pinto for a year for punching a referee, who sent him off during a 2002 World Cup game.

And in 1997 Portuguese soccer chiefs slapped a 12-month ban on Ricardo Sa Pinto, a striker who attacked national coach Artur Jorge at a training session.

Portugal can still make it to the Euro 2008 tournament in Austria and Switzerland next year, but to ensure its berth the team has to win its remaining four games.

The question is, can Scolari lead them?

Daily paper Publico concluded: "The Scolari era is drawing to a close."