Sanya Richards and Yelena Isinbayeva runs for the big prize

With Friday's Van Damme Memorial in Brussels and Sunday's concluding ISTAF meet in Berlin to conclude the Golden League season, only American 400-meter runner Sanya Richards and Russian pole vaulter Yelena Isinbayeva are still in the running for the million-dollar jackpot. 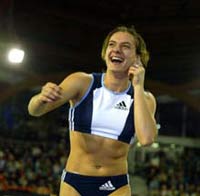 Sanya Richards and Yelena Isinbayeva runs for the big prize

"I am smiling again," Richards said after reasserting her dominance over the 400 with a powerful run in Zurich last weekend.

Isinbayeva, meanwhile, was one jump away from being eliminated from the lucrative race before escaping with victory in Zurich.

Richards and Isinbayeva have won their events in all four Golden League meets so far, and are going for the US$1 million (EUR720,000) bonus on offer for going 6-for-6 in the series. They will split the money if they both finish with a perfect season.

Away from the chase for the jackpot, the focus will be on Jamaican sprinter Asafa Powell, who lowered his 100-meter world record to 9.74 seconds in Rieti, Italy, on Sunday while easing up in the last part of the race.

While Isinbayeva added another world title in Osaka, Japan, last month to her Olympic gold and world record, success has been harder to come by for Richards.

She was the established No. 1 over the 400 coming into the season but, because of illness, failed to qualify for her signature event on the U.S. squad. Instead, she had to settle for a place in the 200 at the worlds and finished outside the medals, well behind Allyson Felix.

If that hurt, a gold medal in the 1,600-relay could only partially make up for it.

"My No. 1 focus now is the Golden League," Richards said. "In Zurich I really wanted to win to stay in the race for the jackpot."

And she did it with an overwhelming performance, beating world champion Christine Ohuruogu of Britain by over 20 meters. Her job was made a bit easier this week, when Ohuruogu decided to skip the Van Damme meet.

Newly crowned 100-meter hurdles champion Michelle Perry had also been in the running for the jackpot but lost in Zurich to Sweden's Susanna Kallur.

Even though Isinbayeva has consistently won this season, she has been far from world record form, and it is doubtful that it will change so late in the season.

The Van Damme has a history of long-distance world records, but none in the sprint events.

Meert had hoped to make the Van Damme a clash between Powell and world champion Tyson Gay. But the American triple gold medalist is skipping the meet.