Nazi salutes during a league match cost much. 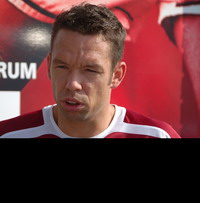 Horvath was fined 200,000 koruna (7,240 EUR; US$9,900) by the federation's disciplinary committee, which concluded its weeklong investigation of the incident, committee head Alexander Karolyi said.

"Unfortunately, he did it," Karolyi said. "It is a punishment for the Nazi salute. ... We absolutely disapprove of such behavior."

Karolyi said the committee consulted an expert on extremism who confirmed the findings.

According to TV footage, Horvath twice saluted Sparta fans with his right arm outstretched seconds before the end of the match against Viktoria Zizkov on Aug. 25, which Sparta won 4-1. Horvath was already substituted at the time.

Horvath said his action was "a big misunderstanding" and claimed he is "not a fascist." He was backed by Sparta, saying he was trying to calm fans down.

"The gestures were unfortunate and I immediately publicly apologized for them to those who could feel hurt," Horvath said in a statement released by Sparta. "But I would like to stress ... that I didn't use words or gestures which would promote fascism."

Sparta spokesman Jakub Votava said the club was considering appealing the verdict. He declined to give details.

Sparta fans have previously chanted racist and anti-Semitic slogans, and chants during a Champions League qualifying match against Arsenal two weeks ago in Prague were condemned as anti-Semitism by the head of Prague's Jewish community.

In 2005, Sparta was forced to play Arsenal in the Champions League with one third of its stadium closed because of the racist behavior of its fans during a previous match against Ajax, which Sparta lost 2-0. UEFA also fined Sparta 32,000 EUR; US$43,750).