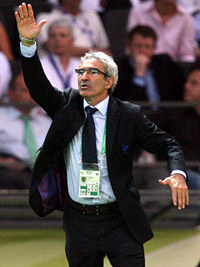 May be the game between Italy and France will be not as exciting as a scandal preceding it.

"The hype surrounding this game doesn't surprise me. The memory of July 9 is still within all of us," Italy forward Alessandro Del Piero said, recalling the date last year when Italy beat France on penalties in the World Cup final.

In an interview published Aug. 9 in Le Parisien, Domenech was quoted as saying there had been a "bought referee" for a match between France's youth squad - which he coached - and Italy during a qualifier for the 2000 Sydney Olympics.

"I've rarely been so ripped off," Domenech was quoted as saying. "When you get fooled once, there's always a doubt (afterward). There are arrangements in Italian soccer."

After the ban was upheld on appeal, Domenech stood by his words. "I said what I thought I had to say," he said.

France beat Italy 3-1 at home a year ago - two months after the World Cup - and leads Group B of Euro 2008 qualifying with 18 points. Italy is next with 16 points, followed by Scotland with 15 and Ukraine with 12.

"There's tension and plenty of motivation - starting with the importance of getting three points," Del Piero said. "We're not letting ourselves get distracted, although these accusations - which are pretty much daily - do bother us."

With Luca Toni suffering from a thigh injury, Del Piero could start in Italy's attack. Filippo Inzaghi is likely to spearhead the Azzurri lineup if Toni doesn't play.

France is worried about a problem with captain Patrick Vieira's thigh. The bigger problem might be Domenech's absence from the sideline.

Domenech was asked how he would communicate with the squad from the tribune.

"I could send text messages, but I don't know how it works," he said jokingly, adding that he would use "telepathy".

Assistant coach Pierre Mankowski will stand in for Domenech.

"Pierre is there in training, he knows us well and knows what needs to be done. He will take the coach's place," Diarra said.

Also missing will be Italy defender Marco Materazzi, who is recovering from thigh surgery.

Materazzi, the recipient of Zinedine Zidane's head butt in the World Cup final, also sat out the last time Italy met France. He was suspended for provoking Zidane.

This time his absence could weigh heavily, with Alessandro Nesta having retired from international play. Andrea Barzagli or Christian Panucci is likely to get the starting nod alongside Italy captain Fabio Cannavaro.