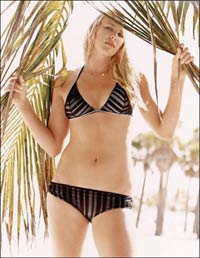 Jackson, who also won in 2003, led the league in scoring for the third time with a career-best 23.8 points per game and also led the WNBA with a career high of 9.7 rebounds per game. Her scoring average was more than five points better than her career average of 18.6 points entering the season, which ended with Seattle's third consecutive first-round exit in the playoffs.

Jackson, selected to the All-WNBA team, set a league record with nine games of 30 points or more. This season, the Australian became the youngest (26 years, 77 days) player to reach the 4,000-point plateau and in the fewest games.

Last month Jackson - who was cheering on compatriot Penny Taylor in the WNBA finals on Wednesday - was selected to the league's all-defensive team.

"Lauren Jackson is an extraordinarily gifted player who turned in one of the most remarkable seasons in WNBA history," league president Donna Orender said. "In leading the Storm to the WNBA playoffs this season, Lauren displayed the kind of all-around excellence that epitomizes the term Most Valuable Player."

Jackson received a total of 473 points in voting among national sportswriters and broadcasters, including 42 first-place votes. Becky Hammon of San Antonio finished second with 254 points, and Phoenix's Diana Taurasi third.

"Lauren cemented the MVP award long before the 2007 season ended," Storm coach Anne Donovan said. "She is a dominating force in the women's game, and clearly showed this season that she's the best player in the world. Fans in the WNBA saw an amazing display this summer when Lauren was on the court."