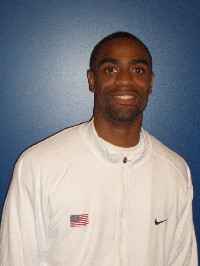 American Tyson Gay won the 200 meters in 19.76 seconds Thursday to complete a sprint double at the track and field world championships.

Gay was the overwhelming favorite in the 200 after clocking 19.62 at the U.S. championships.

Usain Bolt led out of the bend and the pair was neck-and-neck until Gay surged ahead down the straight.

Bolt took silver in 19.91 and the United States got bronze via Wallace Spearmon in 20.05.

Maurice Green (1999) and Justin Gatlin (2005) are the only previous male athletes to have won sprint doubles at the championships.

Gay is expected to go for a third gold medal as part of the U.S. team in the 400 relay.