British midfielder David Beckham left the field in with a sprained right knee the 30th minute as the Los Angeles Galaxy went on to lose the Superliga final 4-3 on penalty kicks to Mexico 's Pachuca. 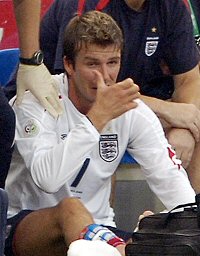 Carlos Rodriguez's kick into the right corner of the net past goalkeeper Joe Cannon gave Pachuca a 4-3 lead in the shootout after the two teams finished 90 minutes of regulation and 30 minutes of overtime tied at 1-1. Abel Xavier missed wide right for Los Angeles, ending the marathon match.

The SuperLiga championship was the only title match the Galaxy will likely play in this season. Its chances of making the Major League Soccer playoffs are slim.

Beckham, who injured his knee after taking a fall, rejoined his team on the bench for overtime and the penalty kicks before limping off the field in a suit and tie.

Pachuca won the trophy and the $1 million (EUR 730,000) prize in the inaugural Superliga tournament that involved four MLS teams and four teams from Mexico's first division.

The SuperLiga title is the fourth championship won by Pachuca in the last year. "Los Tuzos" also won the Mexican title, the CONCACAF Champions Cup and the Copa Sudamericana title.

Pachuca led 1-0 when Galaxy midfielder Peter Vagenas put the ball in his own net in the 28th minute. He collapsed in despair against the back of the net as the pro-Pachuca crowd roared.

In the 86th minute, Landon Donovan's deflection was stopped by Pachuca goalkeeper Miguel Calero, then the ball fell out of his clutches and narrowly missed rolling into the net. Donovan slapped his hands to his head in frustration.

After a string of agonizing misses, Chris Klein tied it at 1-1 on a brilliant bicycle kick in second-half stoppage time.

Donovan later missed a chance to win it when his penalty kick was saved by a diving Calero.

During a scoreless first half, Beckham and Pachuca midfielder Fernando Salazar each went after the ball just outside the Mexican club's penalty area. Beckham tripped over the ball and fell. He lay face down on the grass for a few seconds before getting up and hobbling off the field, signaling to the bench he needed to come out.

Initially, Beckham's injury was announced as a strain. But after he was examined at halftime, the team said he had a sprain.

Salazar left because of a sprained right knee, which, like Beckham's injury, was initially announced as a strain. Alan Gordon replaced Beckham in the 33rd minute, triggering massive booing from the crowd of 12,500.

Beckham made his way to a wall on the sideline, bent over and held on to it before a Galaxy staff member arrived to help him to the bench. He sat down and had his right leg taped, then buried his head in his hands. At halftime, Beckham gingerly walked across the field to the tunnel.

He did not return for the second half.

But Beckham came out to watch overtime dressed in a gray suit, white shirt and black tie. He sat on the bench with his right leg extended.

At the end of the second overtime, Beckham limped onto the field to join his teammates as they regrouped for penalty kicks, clapping his hands in encouragement.

Beckham has had a nagging left ankle injury since before he joined the Galaxy on July 13. It has limited his playing time and caused him to miss games both at home and on the road.

The Galaxy's next MLS game is at home Saturday against Real Salt Lake. Beckham was expected to leave Sunday to join England for 10 days to play in two Euro 2008 qualifying matches, but it was not immediately known how his injury might affect those plans.