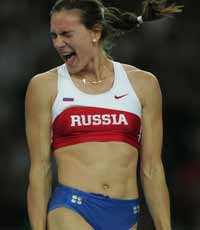 Some champions make the toughest challenge look easy. Count Yelena Isinbayeva and the Kenyan steeple chasers among them.

Isinbayeva hadn't taken off her track suit yet when the first finalist was already out in the pole vault. She lay down, towel over head and feet up, when most challengers faltered.

She brazenly skipped heights that could have given her gold earlier. She braided her hair in between world record attempts.

On her second attempt at 4.80 meters she won one of the most predictable golds of the world championships.

It was the second world title in a row for the Olympic champion. Then she sought her 21st world record at 5.02. It was the only blemish on a near perfect night, failing three times.

She did a neat backflip, waved at the crowd and went to celebrate her gold medal.

Katerina Badurova of the Czech Republic was second at 4.75 on a countback from Svetlana Feofanova of Russia.

The Kenyan steeple chasers turned their traditional domination into the first clean sweep at these championships.

Allowing for Kenyan-born two-time champion Saif Saaeed Shaheen of Qatar, out with an Achilles injury, runners from the African nation have won the last nine world titles.

Buoyed by that success, Janeth Jepkosgei led from start to finish to win the women's 800 meters with such poise, grace and speed, former world champion Maria Mutola just gave up with a grimace with 70 meters to go, unable to catch up.

Jepkosgei won in 1 minute, 56.04 seconds, the top time this season despite the evening temperatures of 30C plus and high humidity. Morocco's Hasna Benhassi got silver and Spain's Mayte Martinez finished third.

Tyson Gay, even if he was not running in a final, was also impressive. After winning the 100 meters over archrival Asafa Powell in a thrilling weekend final, Gay ran with such power in the second-round heat of the 200 meters, he was already turning to check out the competition coming off the bend.

He still finished in 20.08 seconds, by far the best time of the evening ahead of Jamaican Isain Bolt. His main rival, teammate Wallace Spearman, also advanced.

Still, he found the going tough after the hyped clash with Powell.

"Just physically and mentally it drained a lot out of me. I am just trying to refocus," he said, adding his left knee bothered him some.

Gay ran the second fastest 200 ever earlier this season, and combined with the confidence boost the 100 title gives him, he is an overwhelming favorite for a secondgold.

And if the U.S. team is in shape for the weekend sprint relay, he could end up with a triple gold-medal haul.

One champion who failed to deliver was Lithuania's discus thrower Virgilius Alekna. The double Olympic champion finished just out of the medals in fourth place. Instead Estonia's Gerd Kanter won with a best mark of 68.94 meters ahead of Robert Harting of Germany.

In the 400 qualifying, another top favorite coasted just as easily in the muggy, overcast conditions. American Jeremy Wariner almost turned the end of his opening heat into a walk, slowly jogging over the line and stopping right after it while others were straining to get close.

"I felt good. Shut it down at the 250," said Wariner. Even when almost at a standstill at the line, he still finished in 45.10 seconds, just 1.60 seconds outside his top time this year.

"It is that fast," he said of the Nagai Stadium track. But is it fast enough for him to challenge the world record 43.18 set by his mentor Michael Johnson?

"I do not want to talk about the world record now," Wariner said.

The defending champion was joined by teammates LaShawn Merritt and Angelo Taylor in the next round of an event where the United States is looking for a sweep of the medals.

Another defending champion, Michelle Perry, set the fastest time in the 100 hurdles to reach Wednesday's final with 12.55.

Perry, the year's top performer, was brimming with confidence. "Final is for me the duel between myself and the hurdles. We will be three from the U.S in there so why not a sweep," she said.

Ethiopia also has two gold would have counted on a medal from Tirunesh Dibaba in the 5,000. But after winning the 10,000 despite stomach pains, she pulled out of the 5,000, where she could have become a three-time champion.

It robbed the championships of one of the most anticipated duels, between Dibaba and her teammate, world record holder and archrival Meseret Defar.

With World record holder Defar and now Gelete Burka and Meselech Melkanu, Ethiopia is still hoping for a medal sweep.

"I am confident that Meseret, Gelete and Meselech will run very well," Dibaba said.

A veteran seeking to recapture glory and gold is Felix Sanchez in the 400 hurdles. The Olympic champion has been slowed by injury since 2004, yet looked sharp enough during the heats here. And he will not have to deal with defending champion Bershawn Jackson, who stumbled at the last hurdle in the semifinals.