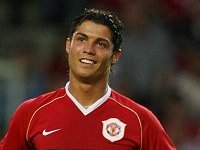 "You'll see (him) soon, very soon. It will be a surprise for everyone. He looks like a model," Milan coach Carlo Ancelotti said.

Ronaldo was criticized for being overweight during his four and a half seasons with Real Madrid. He transferred to Milan in January.

"He's going to have a great season," Ancelotti said. "He's very motivated, he really wants to show that he's still the best striker in the world."

Ronaldo currently has a muscle problem in his left knee and is expected to miss Milan's first few matches this season.

He can play for Milan in the Champions League this season after sitting out the team's victory in the competition last season because he began the season with Madrid.