After the president of the Brazilian soccer federation announced some players came back drunk to the hotel during the World Cup 2006 Mario Zagallo, Brazil's assistant coach at the tournament denied all the claims. 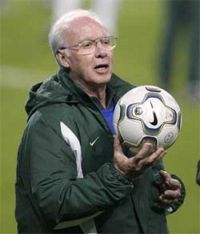 "There was nothing like that," Zagallo told the Estado de S. Paulo newspaper. "We never heard anything about it because it never happened. There was no drinking."

On Wednesday, CBF president Ricardo Teixeira told Estado that a group of players lacked discipline during the World Cup and some players "arrived between 4 and 6 in the morning, drunk."

Teixeira did not single out any individuals.

"I don't even believe the president said that," Zagallo said. "And why say it now, almost two years after (the World Cup)? For what?"

Zagallo said it would be impossible to keep secrets from the hundreds of journalists who followed each step of the Brazilian players in Germany.

"You don't think they would know it?" he said.

With coach Carlos Alberto Parreira in command, Brazil was heavily favored to win its sixth world title in Germany, but it was eliminated by France in the quarterfinals.