Japanese figure skater Nobunari Oda has been barred from international competition and exhibitions for the rest of the year as punishment for riding a motorcycle while drunk, the Japan Skating Federation said Thursday. 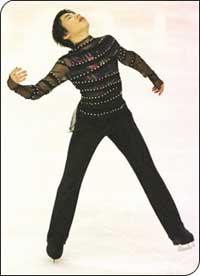 Oda, the 2006 men's Skate America winner, will be allowed to compete in December's Japanese championships, the federation said, giving him a chance to represent Japan at the world championships.

Japan's male skaters are vying for three slots at the championships, in which Oda has participated in the past. He will miss out on the Grand Prix series competitions in Canada and France.

Oda was caught driving intoxicated on his moped by police in a routine check at Osaka on July 27. He was not involved in any accidents.

While out of competition, Oda will undertake volunteer work, the federation said in a statement. The kind of volunteer work was still to be decided.

Federation head Seiko Hashimoto has informed Oda about the punishment, and Oda apologized and accepted the penalty, a federation official said, requesting anonymity.

When his driving infringement was made public, a tearful Oda, who also often weeps at competition, was shown on nationally televised news offering an apology.

With his expressive dance skills and disarming charm, Oda is one of the most popular male figure skaters in Japan.

Oda is known in Japan as being the descendant of a famous samurai, Nobunaga Oda, which has helped endear him with fans.