No one needed to remind Erik Morales that he has a three-bout losing streak or that his last victory was more than two years ago. 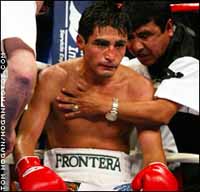 For those who are ready to dismiss him, he has a message: He won't go away without a fight.

And he has a big one on Saturday night.

Morales (48-5, 34 knockouts) will try to become the first Mexican to win boxing world championships in four weight classes when he challenges Chicago's David Diaz (32-1 with one draw and 17 knockouts) for the WBC lightweight title at Allstate Arena in suburban Rosemont, Illinois.

If he wins, the 30-year-old Morales said he will fight one more time in Tijuana, Mexico, where his career began. If he loses?

"Finito," he said on Wednesday.

Both fighters have something to prove.

Diaz, making his first defense, did not take the belt from a champion. Instead, he stopped Jose Armando Santa Cruz in the 10th round of a fight he was losing last August to become the mandatory challenger for the title. Diaz, 31, got the belt when the WBC stripped Joel Casamayor.

Morales wants to show that he has enough left to beat the best - including Diaz.

"I don't know if I'm at the best right now, but I still feel I have plenty left in me," he said through an interpreter. "I watch TV now and I see some of these other guys fight, and I say, 'I've got more than them."'

There was a time when few would dispute that.

Morales won his first world championship when he stopped Daniel Zaragoza for the WBC super bantamweight title in 1997 and beat WBO champion Marco Antonio Barrera in a unification bout in February 2000.

But Morales has since dropped four of five bouts, starting with a majority decision against Barrera in November 2004. He beat Manny Pacquiao by unanimous decision the following March, before dropping a unanimous decision to Zahir Raheem in September 2005. And Pacquiao stopped him twice in 2006 - on a 10th-round technical knockout in January and a third-round knockout in November.

"I see a lot of people that are disappointed because the life of a boxer is very cruel," said Morales, whose purse for this fight is $750,000 (EUR 548,900). "You lose one fight, and they want to send you toward retirement. I think I've had many other big nights that people seem to have forgotten all of a sudden, and I believe in myself like I've always done. And we're ready for the fight."