For the first time in at least 30 years, zero U.S. men will play in the second round at the French Open. 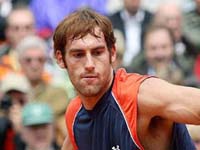 All nine American men entered in the clay-court Grand Slam lost their opening matches, capped by Robby Ginepri's five-set loss to Diego Hartfield of Argentina on Wednesday in a match suspended the night before because of darkness.

It's only the third time in the Open era, which began in 1968, that there are no Americans in the second round of a major. The two other times - at the 1972 and 1973 Australian Opens - no Americans entered the events.

The 48th-ranked Ginepri and No. 89 Hartfield split the first two sets Tuesday. When they resumed play Wednesday, Ginepri took the third set and went up 2-0 in the fourth. But Hartfield slowly took control as Ginepri's unforced errors mounted, and the final score was 6-4, 1-6, 5-7, 6-4, 6-2.