Former champion Myskina loses to Shaughnessy in 1st round

Anastasia Myskina, the 2004 French Open champion, lost 6-1, 6-0 to Meghann Shaughnessy of the United States in the first round of the Grand Slam tournament Wednesday. 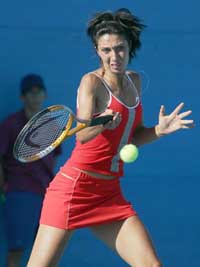 Former champion Myskina loses to Shaughnessy in 1st round

It was the Russian's seventh consecutive loss, a drought that dates to August, and includes a first-round exit at last year's U.S. Open.

Once a top-10 player, Myskina has dropped to 51st in the rankings, in part because of a left toe injury that required surgery in January.

"The scar is really sensitive," the 25-year-old Russian said. "I've been practicing (for) one month, and I was just thinking to come here and see what can I do with my foot. But it wasn't that good."

Myskina got injured at a tournament in Stockholm, Sweden, in August. Wednesday's match was her first since losing to Gisela Dulko in January, and she had no expectations of beating Shaughnessy.

"Well, you have to be a realist," Myskina said. "I knew that I'm not going win, but I just want to see how my foot is going to feel during the matches. I have to play some matches anyway."

Myskina said she may quit tennis if her foot problems persist and she is unable to break into the top 10.

"I had the great life these (past) five months in Moscow," Myskina added. "So I know how it's going to be after tennis. And it's fine with me."

Myskina hurt herself Wednesday with repeated mistakes. She made 13 unforced errors in the second set alone, 10 more than Shaughnessy.

Shaughnessy hadn't won a match at the French Open since 2004.