After winning in Asia in April and Europe in May, Fernando Alonso now looks to win in North America in June. 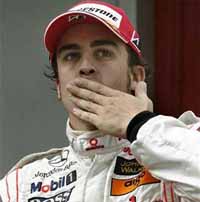 The Formula One series shifts to North America with the Canadian GP on June 10, followed by the United States GP. Between the both, Alonso has one just one time, the Canadian GP last year, despite winning the season title the last two years.

In winning at Monaco for the second consecutive year Alonso became the first driver to win back-to-back races in Monte Carlo for different teams.

Drivers like Michael Schumacher in 1994-95 for Benetton and the late Ayrton Senna between 1989 and 1993 for McLaren won at Monaco in successive years but always for the same team.

Alonso won last year's race for Renault from the pole position after Schumacher was stripped of the honor for hindering him in qualifying.

This year he finished 4 seconds ahead of McLaren teammate Lewis Hamilton with both McLarens more than a minute ahead of Ferrari's Felipe Massa after 78 laps on the twisting 3.34-kilometer (2.076-mile) street circuit.

It was Alonso's 17th overall win and the second this season.

It was also one of the simplest.

"I've never won with more than a minute to the third guy (before)," Alonso said. "For sure, this was one of the easiest and nicest victory so far.

"It has been a fantastic weekend, no doubt, and to score this hat trick pole, fastest lap and race win is something very special and even more so here in Monaco."

Alonso and Hamilton share the lead in the standings with 38 points. Alonso has two victories so far this season compared to none for Hamilton, who has had five straight top-three finishes in his rookie season.

Being the rookie may have hindered Hamilton as he chased Alonso in the latter stages of the race.

"He was obviously close to me, and I was told to take it easy. There was no point in pressuring him into a mistake, and then when he did make a mistake, crash into him," Hamilton said.

"At the end of the day, I am a rookie. I am in my first season in Formula One and I have finished second in only my first Monaco Grand Prix so I really can't complain. I've got No. 2 on my car. I am the No. 2 driver."

Alonso led virtually from start to finish, giving up the lead only on the pit stops. Massa knew he couldn't keep up with the McLarens.

"Even if I pushed 150 percent on the limit it would stay the same _ they were pretty quick today," he said. "Given the situation, I concentrated on just managing my race and bringing the car home. These points are very important."

Kimi Raikkonen of Ferrari, who won the first race of the season, was eighth after starting 16th when he broke a wheel steering arm in qualifying Saturday.