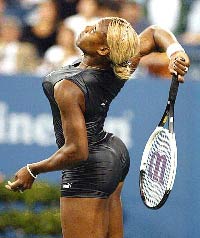 Her first French Open match since 2004 hardly went according to plan at the outset Sunday, and Williams kept grimacing and admonishing herself as each shaky shot helped her 91st-ranked opponent race ahead by a set and a service break.

Then, suddenly, the eight-time major champion's strokes began heeding her shouts. Williams ran off 12 of the last 13 games to beat Tsvetana Pironkova of Bulgaria 5-7, 6-1, 6-1 in a match interrupted 6 hours, 16 minutes by rain.

"I often get upset. I usually just hide it, but I guess I didn't do too well hiding it today," Williams said after improving to 30-0 in the first round of Grand Slam tournaments. "I'm always fighting, you know? I'm thinking, 'I've got to fight.' If I'm going to go down, I'm going to go down screaming and kicking."

Hers was one of only seven matches played on a wet Day 1 at Roland Garros.

"It just kept raining," the eighth-seeded Williams said. "It didn't bother me. I think I fell asleep at some point."

Perhaps that explains why she seemed as out of sorts right after the rain delay as she did when play began under a ceiling of charcoal clouds at Court Suzanne Lenglen.

Williams won the 2002 French Open, but she missed the last two editions because of injuries, and Pironkova didn't exactly provide a proper welcome: The 19-year-old broke the American's serve in the first game.

When Williams fell behind 5-2 by dumping a forehand into the net for one of her 26 unforced errors in the first set, she dropped to a knee, lowered her chin and slowly walked to the changeover chair.

No way anyone counts out Williams anymore, not after so many comebacks, most recently when she entered the Australian Open ranked 81st and emerged with a championship. Still, the way she was playing and gasping for air after some of the lengthier exchanges didn't look good.

Even after Williams tied the first set at 5-5, she was immediately broken back, and she kept talking to herself as raindrops fell. One ill-advised sliced forehand into the net was followed by a "Come on, Serena!" A backhand into the net drew an audible sigh.

With Pironkova leading 6-5 and about to try to serve for the set a third time, Williams indicated to the chair umpire she didn't think they should keep playing. Williams went over to the sideline and put on her pink-and-purple jacket, while Pironkova stood at the baseline, waiting to see what would happen. Eventually, play was halted - even though Safin's match and others around the grounds would continue for more than 20 minutes before all action stopped.

"It would be better for me if it didn't rain today, because I was in a rhythm already," Pironkova said, "and when it started to rain, I lost it."

Turned out he was right - eventually. When the players went back on court, both now wearing long sleeves, Williams made four consecutive unforced errors to drop the first set. Four more miscues by the American handed a 1-0 lead in the second set to Pironkova, whose career highlight was knocking off Williams' older sister Venus in the first round of the 2006 Australian Open.

Did Pironkova think she had a chance to repeat that feat?

"Yeah, definitely, after the first set," she said. "But then things started to move a little bit faster."

So did Williams, who broke back to 1-1, then really began to find the range at deuce in the next game. She skidded across the clay and bent way down for a volley winner, then hit a cross-court backhand that touched a line.

That was part of a run of nine consecutive games for Williams, a span in which she claimed 39 of 56 points to take complete control. By the end, Pironkova was the one with the negative body language, repeatedly flinging her racket after lost points.

"I have to knock on wood," Williams said. "It's going to happen, maybe, one day, but I'm really proud of that record."