Santos rallied with goals from Jonas and Rodrigo to defeat America of Mexico 2-1 to advance to the Copa Libertadores semifinals. 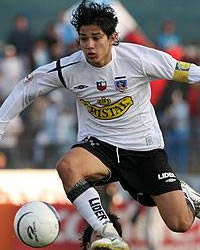 After a 0-0 tie in the first-leg of the quarterfinals series, both teams needed a simple victory to advance to the final four and face Brazilian side Gremio, which eliminated Uruguay's Defensor Sporting earlier Tuesday. Santos was supposed to play Cucuta of Colombia, but the matchups were changed to avoid having two Brazilians meet in the finals.

Santos came out aggressively, with Cleber Santana and Kleber getting good chances early under a driving rain.

The Brazilians' best chance came at 31 minutes, when Cleber Santana sent a perfect cross into the penalty area and Marcos Aurelio fired a shot off the post. Kleber sent the rebound off the side of the net.

But a minute later, striker Nelson Cuevas took advantage of a lapse in the Santos defense and fed Daniel Bilos, who fired between two defenders and found the right corner of the Santos goal for a 1-0 lead.

America nearly widened the lead two minutes later, when Cuevas fired from the left side to the far corner, and the ball went just wide of the post.

After halftime, America tightened its defense and put all 11 players in its own end. Ze Roberto and Rodrigo Souto tried in vain to crack the defensive wall.

America players were content with the result and traded passes in their own end, to the boos of Fans at Vila Belmiro stadium.

But that changed at 64 minutes, when Cleber Santana fired across the penalty area and found Jonas, who adjusted the ball and fired under 'keeper Armando Navarrete to make it 1-1.

Fans chanted and sang in the stands, as Santos controlled the game and America wasted its last chances on long balls into the Brazilian goal area.