Pakistan batsman Imran Farhat was fined half his match fee Friday for criticizing the chief selector. 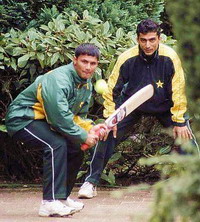 Farhat made a strong-worded phone call to the PCB's newly appointed chief selector Salahuddin Ahmed soon after the left-handed batsman was not picked up for the three-match one-day international series against Sri Lanka, starting at Abu Dhabi next week.

"After the complete review of the matter, the board has sanctioned Imran Farhat with 50 percent of his match fee for the first match that he now plays for Pakistan," the PCB said in a statement.

The batsman has also been put on a six-month probation during which his behavior and attitude will be monitored, it said.

"The punishment has been kept lenient considering the facts that this was only the first offense committed by Imran Farhat and he also submitted a written apology for this to the board," the PCB said.

Farhat criticized Ahmed for not selecting him prompting the chief selector to make an official complaint to the board.

Farhat's father-in-law Ilyas Ahmed - a former test cricketer - reportedly also was not happy with the selectors and exchanged heated words with members of the selection committee.

The three-match series between Pakistan and Sri Lanka will be played on May 18, 20 and 22.