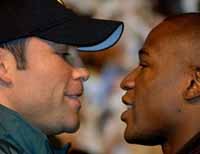 A total of 2.15 million households in the U.S. paid $54.95 (EURO 40.60) for the fight, which a person close said would be worth $45 million (EURO 33.3 million) for De La Hoya and just over $20 million (EURO 14.8 million) for Mayweather. That person requested anonymity because the promoters did not want official figures released.

The $45 million (EURO 33.3 million) would be the biggest purse paid to a fighter, higher than the $35 million ( EURO 25.9 million) purses Mike Tyson and Evander Holyfield reportedly were paid for their second heavyweight bout, the infamous "Bite Fight" when Tyson bit Holyfield's ear.

The American cable channel HBO produced the bout through its pay-per-view arm and Ross Greenburg, head of HBO Sports, credited the success of the network's "24/7" reality show that ran in a coveted Sunday night slot for three weeks leading up to the fight with helping sell the bout.

Mayweather and his dysfunctional family, including his estranged father, Floyd Sr., and his trainer and uncle, Roger, became the stars of the show, allowing non-boxing fans a glimpse into the life of the fighter.

"The series was not only well received by the American public, who were suddenly attracted in a very human way to these two fighters, but it allowed the media to cover the fight in more depth," Greenburg said. "They were able to dive deeper into the backgrounds of both fighters."