A 15-member Indian team led by captain Rahul Dravid arrived Monday in the Bangladeshi capital, Dhaka, pledging to play a hard game in the limited-overs and test series. 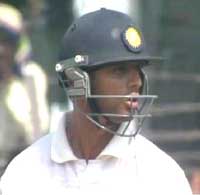 "We came to play hard cricket, because we had an experience against Bangladesh in the World Cup" team manager Ravi Shastri told reporters at Dhaka's international airport.

India suffered an upset loss to Bangladesh at this year's World Cup in the Caribbean, hastening the former champion's exit from the preliminary round of the tournament.

"I am confident with the series, and definitely like any other series, we are here to win," said Dravid.

"We are not here for revenge," the Indian skipper added.

Dravid said the conditions in Bangladesh were similar to India.

"We are used to the conditions here, because the weather is almost the same as in India," Dravid said.

He said he was feeling better after injuring his nose during a practice session in the eastern Indian city of Calcutta.

The visitors were expected to do some practice Monday, and to hold a news conference Tuesday ahead of the first one-day match on Thursday.

India will play three limited-overs internationals, followed by two tests, during its 24-day Bangladesh tour. The other two one-dayers will be played May 12 and 15, while the tests will be held from May 18 and 25.

India last toured Bangladesh in December 2004, when the hosts registered their first ever limited-overs international win on home ground, beating the more fancied Indian squad by 15 runs in one of the matches.