Sachin Tendulkar's injury heals ahead of his team's Bangladesh tour

Sachin Tendulkar's ankle injury is healing fast, but he didn't join a practice session ahead of his team's tour of Bangladesh. 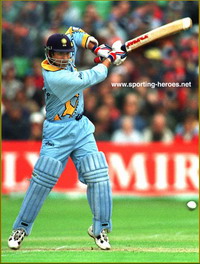 Sachin Tendulkar's injury heals ahead of his team's Bangladesh tour

Tendulkar suffered the injury Wednesday while negotiating a bouncer from fast bowler S. Sreesanth on the first day of a weeklong conditioning camp.

"Sachin Tendulkar is much better. It (the ankle) is almost 80 percent," Samir Dasgupta, a team manager, told reporters.

Tendulkar is the world's fourth-highest test run scorer with 10,688 runs after Brian Lara of the West Indies and Australians Allan Border and Steve Waugh.

The Indian team leaves for Bangladesh on Monday to play three limited-overs internationals, followed by two tests. The one-dayers will be played May 10, 12 and 15, while the tests will be held May 18 and 25.

Tendulkar, who along with Sourav Ganguly has been rested from the one-day squad, will play in the test matches.

India suffered an upset loss to Bangladesh at the just-concluded World Cup in the Caribbean, hastening the former champion's exit from the preliminary round of the tournament.

India last toured Bangladesh in December 2004, when the hosts registered their first ever limited-overs international win on home ground, beating the more fancied Indian squad by 15 runs in one of the matches.