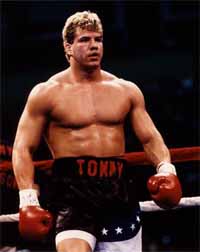 Dick Cole, boxing administrator for the state's Department of Licensing and Regulation, said a Houston doctor, Jorge Guerrero, examined Morrison on Thursday and cleared him to fight. But Guerrero never filed the paperwork required by the agency, Cole said.

Morrison told Houston television station KRIV he was stunned when he learned the fight was canceled.

"I've done everything I was asked," Morrison said. "These blood tests can take up to eight days. Yet they bring me in here five days before the fight. It almost feels like a setup."

Cole said the agency is trying get the issue resolved.

"As soon as we get that in, he'll be licensed," Cole said. "They say he's OK. But we can't afford to just assume like that. I'm sure he is fine. But we need to have certain forms to prove it and we don't have those."

The 38-year-old Morrison is attempting to come back after an 11-year retirement following the discovery that he had contracted the virus blamed for causing AIDS. Morrison claims he has taken several AIDS virus tests during his comeback bid and all have been negative.

Morrison was slated to fight Dale Ortiz in a four-round bout in a Houston hotel ballroom on Friday night. Morrison was not immediately available for comment. The hotel did not have a guest registered under Morrison's name.

Morrison returned to the ring earlier this year in West Virginia, knocking out John Castle in the second round. West Virginia athletic commissioner Steve Allred approved Morrison's participation in that fight after reviewing medical records and consulting with the Association of Boxing Commissions' medical review committee.

On Thursday, Patrick Shaughnessy, a spokesman for the Texas Department of Licensing and Regulation, said Morrison had been granted a boxing license in Texas. Cole said the agency gave Morrison a "verbal agreement" to issue him a license, but could not actually grant one until it received the paperwork.

Morrison won the WBO heavyweight belt in 1993 by outpointing George Foreman, but lost the title later that year. He was scheduled to fight Stormy Weathers when he tested positive for the AIDS virus in February 1996.