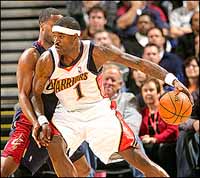 Golden State's Stephen Jackson was fined $50,000 (EUR36,650) by the National Basketball Association on Friday for his conduct after being ejected late in the Warriors' loss to the Dallas Mavericks in Game 2 of their first-round playoff series on Wednesday night.

Jackson left the court in a contentious, roundabout manner after getting his second technical foul. Teammate Baron Davis also was ejected from the game, apparently for sarcastically applauding the officials late in the third quarter.

On Thursday, Golden State coach Don Nelson said he'll fine both players. Nelson didn't announce the amount of his fines, saying only, "It will be substantial."

Game 3 of the first-round series was Friday night.