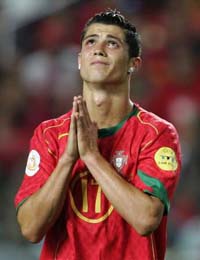 Rooney tilted the balance of Tuesday's Champions League semifinal back in United's favor when he surged forward to grab an injury-time winner at Old Trafford.

The 21-year-old striker's sublime shot from the top of the area ensured United will resume next week in the San Siro with a slender 3-2 advantage.

"He didn't take a touch on it, just hit it first time. It was a brilliant goal," United manager Alex Ferguson said. "On an occasion like tonight, we needed our big players to hit the heights."

Rooney rose to the occasion, masterminding the comeback from a 2-1 deficit.

"We knew it would be difficult to get the win," Rooney said. "The manager told us to keep pushing, keep going and we'll get the goals, and we did."

Operating as the lone striker, Rooney equalized on the hour after Paul Scholes chipped the ball over the Milan defense, hitting a right-footed shot that Dida was able to only partially block.

Milan coach Carlo Ancelotti said Rooney's winner will force his side to battle for a result next Wednesday.

"We are completely confident, disappointed about how it finished but confident about the return leg," Ancelotti said. "We sat back a bit too much and left the initiative too open for them. Having conceded that goal obliges us to make the return leg all ours."

In less than a month, Rooney has reversed his fortunes - and silenced the sniping for now.

Goals in both quarterfinal matches against AS Roma ended his European goal drought, which had endured since a hat trick on his debut against Fenerbahce in September 2004.

Tuesday's brace came against a side that had conceded just one away goal in the competition all season.

The exquisite finishing stole the limelight from Ronaldo, who commanded the pre-match headlines after scooping two awards from his fellow English Premier League professionals at a glitzy ceremony last weekend.

The Portugal winger was instrumental in United's leading score inside six minutes with a header bounced off Dida.

But Ronaldo was tamed for most of the night and eclipsed by Kaka, who eased the Rossineri's plight.

The Brazil midfielder scored in the 22nd and 37th minutes to put the more experienced Italians ahead by halftime, before Rooney turned the tie around.

"We have been very ingenuous, we gifted the victory," midfielder Massimo Ambrosini said. "A draw would have been the right result. We played very well for an hour. Manchester United never gave up but we knew that."

Milan's task will be aided by United's crisis in defense. Rio Ferdinand, Gary Neville, Nemanja Vidic and Mikael Silvestre are injured, while fullback Patrice Evra will be serving a suspension.

"It's going to be difficult, it always is going to the San Siro," winger Ryan Giggs said. "But we've seen enough in the second half to show that we can go there and get a good result. If we keep our character and nerve then hopefully we will."

Ferguson is used to winning the hard way.

"We have an outstanding chance now," the veteran manager said. "With the speed of our game, I believe we will score in Italy. Whether it will be enough I don't know. It will not be easy - but it will not be easy for them either."