Duncan Fletcher said farewell to the England cricket team and insisted he still had plenty to offer. 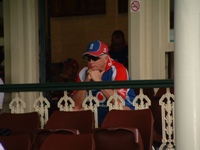 After eight years at the helm of one of the toughest jobs in cricket, Fletcher has quit as England coach and is looking for a new job.

Although he said he stepped down for personal reasons, Fletcher said he still had plenty of ideas that were never used.

"I've got ideas that I think I can help with. As far as coaching's concerned, I'm still forward thinking, I can think outside of the box and at the same time I have a skill where I can really get to basics ... I think I can cover the full spectrum."

After taking the job in 1999, Fletcher lifted England from next-to-last in cricket's ranking of eight test playing nations up to second behind Australia. The team won eight tests in a row, and then the highlight was regaining the Ashes by beating the Australians 2-1 in 2005.

After that, however, came a spectacular decline as England lost 5-0 in Australia for the first time in 86 years. Although Fletcher finished his England spell with a victory over the West Indies at the World Cup on Saturday, the team had known for several days it would not reach the semifinal.

Although Saturday's thrilling one-wicket victory papered over the cracks of a team in a lingering slump, Fletcher said he had given successor Peter Moores a side with potential.

"I think that of all the sides in world cricket today, I think the foundations are there," he told a news conference. "You look around, we're the youngest side in world cricket, not only in caps but in age to some degree.

"We've shown it the way we can play on occasions, we haven't really put it together on a consistent basis."

"I see the reason for what's happened over the past year. But I think that what happens is that my reasons don't make a good story," he said. "You've got to blame someone and you've got to find the reasons so that you can blame an individual.

"My reasons are that we were a side that had a lot of injuries. It's not only been proven with our side, it's been proven with other sides. Australia went to New Zealand with minus three and they only lost because they were missing three key players. We go to Australia with three or four missing a test series and that's not a good reason, it's (seen as) an excuse."

Fletcher's departure comes at a time when several test team coaches are also on the move so that, even at age 58, he believes he still has plenty to offer.

"I was really honored to coach England and I think it's the best job in the world at the moment," he said. "I think the job's pretty good. When I got the job not many people wanted it. Now everyone's clamoring for it."