Australia match against Argentina postponed due to lack of top players

Argentina's soccer international against Australia on June 6 at Melbourne has been postponed indefinitely because the South American team was concerned it could not field enough top players for the match. 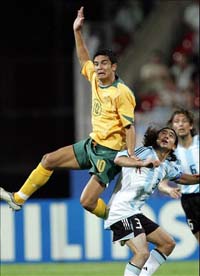 Australia match against Argentina postponed due to lack of top players

Football Federation Australia said Friday it had agreed to the Argentinian Football Association's request to reschedule the match to later in the year.

"Argentina made the request due to concerns that as a result of other match commitments in Europe (made subsequent to their committing to the match in Australia) they would be unable to bring their top players nor have sufficient preparation for the match on June 6," the FFA statement said.

"FFA is committed to hosting only a full-strength Argentina team in Melbourne."

The Australian federation said it would meet with its Argentine counterpart next week to confirm a revised date.

Australia planned to use the match as part of its warmup schedule ahead of its inaugural Asian Cup appearance. It will play Uruguay on June 2 at Sydney and Singapore in Singapore on June 30 in other scheduled matches.

Oman is Australia's first opponent in the Asian Cup - July 8 in Bangkok. Australia plays Iraq on July 13 and Thailand on July 16 to close out its group play, with the final two matches also in Bangkok.