Jamie McMurray was relieved after Jeff Gordon easily took the pole from him for the Subway Fresh Fit 500 at Phoenix International Raceway on Thursday. 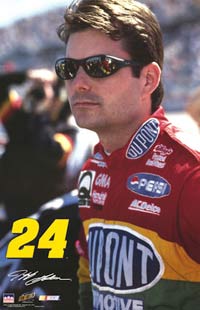 "I guess trying to find the positive in it, it wasn't even close," McMurray said after taking the outside front-row spot for Saturday's race.

"I hit the wall at both ends and I was sliding all over the place. There was nothing else I could do. I hate it when you get beat by a hundredth of a second or something like that. There was no question about this one."

McMurray, driving a Ford for Fenway Roush Racing, was sitting in the top spot with a lap of 132.577 mph (213.35 kph) when Gordon drove his Hendrick Motorsports Chevrolet onto the 1-mile (1.6-kilometer) oval in the fading light and cooling temperatures of late afternoon.

"After Jamie put up his lap, I told my guys, `Sorry. That's four-tenths. We don't have that much.' But we did," Gordon said.

Gordon, who was 37th of the 50 cars that made qualifying attempts, got the benefit of a cooler track surface, but none of the other drivers who went late could keep him from winning his fourth pole of the season and the 59th of his career.

That tied him with three-time champion Darrell Waltrip for fourth on the career list.

The qualifying session marked the end of the first official day for NASCAR's new Car of Tomorrow on a track bigger than a half mile (800 meters).

"We didn't really know what to expect," Gordon said of the COT. "Qualifying is one thing. We'll see how this car is when you're around other cars on the track in practice tomorrow and then again in the race on Saturday."

Although he has yet to win a race this season, Gordon is off to a great start with five top five finishes and six top 10s in the first seven races. He heads into the Phoenix race eight points ahead of runner-up Jeff Burton, last week's winner at Texas.

"So far, everything has been good," Gordon said. "If this team keeps giving me great cars and the effort they've been giving, this could be a great season."

The top qualifying Toyota driver was Dave Blaney in 11th, with rookie David Reutimann in 25th the only other Camry driver to make the field on qualifying time.

Reutimann's veteran teammates, Dale Jarrett and team owner Michael Waltrip did not fare as well. Waltrip was 38th overall and failed to qualify for the seventh straight race, while Jarrett was 48th and had to use the fifth of six allowable former series champion's provisionals to make the 43-car field.