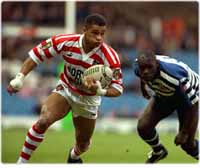 Brisbane will host the rugby league World Cup final and one of the semifinals next year, government officials announced Thursday.

The cup final will be played Nov. 22, 2008, and Suncorp Stadium will also host a semifinal on Nov. 15, Queensland state premier Peter Beattie said.

Sydney is expected to host the opening ceremony, while a semifinal and at least five pool matches will be played in New South Wales state. Townsville and the Gold Coast will also host matches in Queensland.

Ten teams are expected to play in the 2008 World Cup, divided into two pools.

The league World Cup was first held in 1954 and has been won by only two countries - Australia on nine occasions and Britain three times. Australia won the last World Cup held in England in 2000.