Astronaut Sunita "Suni" Williams started her version of the Boston Marathon, running on a treadmill 210 miles (338 kilometers) above Earth. 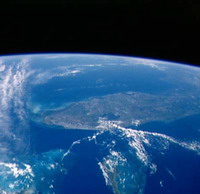 Already traveling at 17,500 mph (28,162 kph), Williams started the race on time at 10 a.m. EDT (1400 GMT) with race No. 14,000 taped to the front of the treadmill. Two lap top computers were on either side of the treadmill so she could watch a live feed of the race from Boston and keep track of where the space station was flying.

While racers in Boston bundled up on a raw day, with much of the northeastern United States being pummeled by rain and strong winds, the space station was balmy enough that Williams needed only a navy T-shirt and shorts.

Restrained to the treadmill in a harness so she would not float away, Williams ran at a brisk pace at the start of the 26.2-mile (42.2-kilometer) race. Williams' sister, Dina Pandya, and NASA astronaut Karen Nyberg were running in the race on the ground.

"Just want to let you know the team here is cheering for her and by our calculations she already has completed her 26 miles," Mission Control told her crew mate, Michael Lopez-Alegria, a few minutes into the race.

Lopez-Alegria and Williams woke up several hours earlier because of the marathon. The 41-year-old Williams qualified for the Boston race by finishing the Houston Marathon in January in 3 hours, 29 minutes, 57 seconds.

In an interview with The Associated Press last week, Williams joked that she was hoping the station's treadmill would hold up since it has had its share of breakdowns.

"Marathons are hard on the body," she said. "It's hard on the machine. I hope both of us survive."